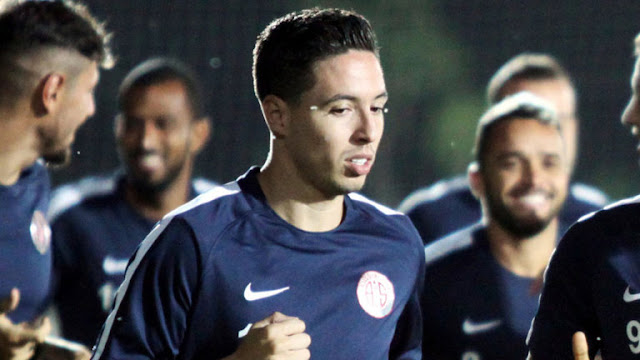 Former West Ham hero Carlton Cole has encouraged his former club to move for Premier League winner Samir Nasri.
The controversial midfielder is reportedly training with the Hammers as he aims to win a six-month contract upon his return to professional football.
The 31-year-old was banned from professional football for 18-months after having been found guilty of contravening World-Anti Doping (WADA) rules in 2016. Prior to his ban, the former France international had been playing for Turkish club Antalyaspor.
The Hammers have so far had an inconsistent start to the Premier League as they languish in 13th position with 12 points from 12 games. They could certainly do with some solid additions in midfield.
Nasri may be arguably past his prime but he is nevertheless still at an age where he can perform at an optimal level. Nasri also has a wealth of experience in the Premier League having been part of the English top-flight for nine-years between 2008-2017 during his stints with Arsenal and Manchester City.
During his time with the Citizens, Nasri won two Premier League titles and one League Cup. He enjoys a good relationship with current Hammers boss Manuel Pellegrini and the duo won the Premier League and League Cup together during the 2013/14 campaign.
“I think the manager has a good relationship with him,” Cole told Sky Sports. “We know his class, he’s a classy player.
“He will bring something different to the squad and he has that experience too.

“It will be a great addition to the squad but it depends what the manager wants and what the owners want.”