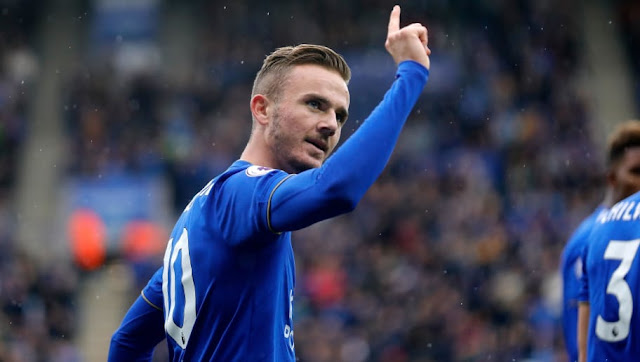 Leicester City’s James Maddison has apologized for having earned a red-card during his sides 1-1 draw against Brighton and Hove Albion on Saturday.
Referee Chris Kavanagh handed a second yellow card to Maddison during the 62nd minute after he went down with very little contact.
Maddison has since admitted that he dived and apologized for his behaviour. He wrote on Instagram:
“Apologies to everyone for what happened today. Nobody wants to see diving in our beautiful game.
“I was anticipating contact that never came, but that’s no excuse. It’s a mistake and I will learn from it.
“Lads showed fantastic fight and determination to get us back in the game and go home with a more than deserved point.”
Despite the set-back, the 22-year-old Maddison has been one of the best performers for Leicester so far this season and he certainly looks like he is a potential future star in the making.
Since joining the Foxes from Norwich City during the summer, he has gone on to make 12 Premier League appearances, scoring three goals and notching two assists.
Off course, what he did during the game this weekend was un-sporty behaviour. However, the youngster is still learning so he can be forgiven.
It is also admirable that he actually admitted to being wrong and vowed to learn from his mistakes. Diving is an offence which is rampant in football, yet it is something which very few players will admit to doing.

Hopefully more players can follow in the footsteps of Maddison going forward.

Leicester City are considering a move for Ajax left-back Nicolas Tagliafico as a replacement for Ben Chilwell who is close to signing for Chelsea,...
Read more
Leicester City

Leicester City boss Brendan Rodgers has rejected transfer claims that they approached Liverpool to sign Adam Lallana in the summer, as per the Daily...
Read more
Celtic

Celtic have been linked with Leicester City player Filip Benkovic for a loan deal after he impressed everyone with his amazing performances at Parkhead...
Read more