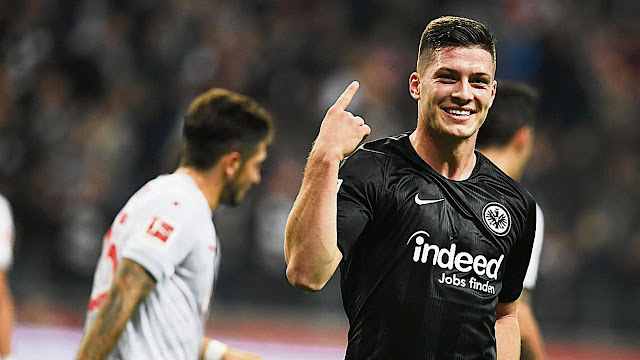 Everton have been an impressive side under manager Marco Silva, but can the Toffees really punch above their weight and break into the top-six this season and going forward permanently?

Despite scoring 16 goals in 10 English Premier League games thus far, the Goodison Park outfit still need to further strengthen their attack in the next transfer windows, and Benfica striker Luka Jovic could be the perfect addition.
The 20-year-old has been blowing minds at Eintracht Frankfurt – where he is currently on loan – and has already made history having only just arrived in the summer of 2017.

Jovic scored a glut – five goals – during the Bundesliga’s side 7-1 demolition of Fortuna Duesseldorf a fortnight ago, and now holds the record of being the youngest player to score five goals in a German top-flight match.
The youngster is also the first Serbian to ever score a Bundesliga hat-trick, and now has nine goals in just five starts for Frankfurt.

3 – Luka #Jovic is the first Serbian player to score a hat-trick in the #Bundesliga. Hat-trick. #SGEF95 @eintracht_eng pic.twitter.com/GYYVVVb7lx

Jovic scored just nine goals in 27 appearances last term, but has already matched that return in just 10 games this term.
The form of the former Red Star Belgrade striker has already attracted Premier League duo Chelsea and Tottenham, as reported by Calcio Mercato, but Everton can still have the upper hand with the promise of regular football and even a starting berth.
Jovic is already proving he can cut it in Europe, as his goals have helped the German side go top of their group ahead of Marseille and Lazio.

Everton are still ruing missing out on Olivier Giroud during the summer, but they could be landing the perfect Romelu Lukaku successor in the two-time Primeira Liga winner should they make a move.