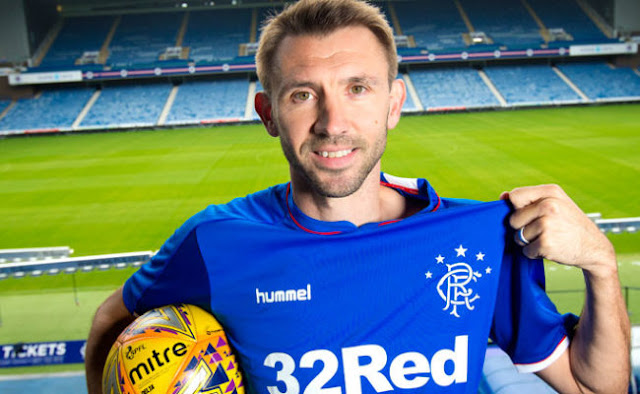 Rangers ran riot on Sunday, demolishing 10-man Motherwell 7-1 to move within two places of joint-leaders Celtic and Hearts.
The Light Blues put in very impressive shifts at both ends of the pitch, and it was the perfect response manager Steven Gerrard would have wanted following Thursday’s Europa League loss to Spartak Moskva.
Summer arrival Gareth McAuley finally made his Scottish Premiership debut for the Light Blues having played for the first time during the week, and the defensive veteran performed brilliantly in the 45 minutes he spent on the pitch.
An injury had kept the Northern Ireland international out of action upon signing a one-year deal on a free during the summer after he left West Bromwich Albion, but he reckons a proper pre-season preparation would have kept him in shape ahead of the new season.
“I have enjoyed it, and it has been hard work,” McAuley told RangersTV of his debut.
“In hindsight, I should have gone in somewhere and done pre-season properly.
“But here I have done the hard work and I feel fit and ready to go and hopefully go away on international duty now and hopefully get some more minutes, and then come back, compete and hopefully get more minutes and push for starts.”
Rangers have enough depth at the back with McAuley now set to play a key part of the first team, and his experience will surely come handy for the Ibrox side going forward.
The Light Blues will be looking to challenge strongly for the league and Scottish Cup, and Gerrard needs all hands on deck if his side are to have a chance.

After securing seven wins and three draws in their opening 12 league games of the campaign, Rangers head into the break in high spirits and will be looking to continue from where they stopped when Livingston come visiting upon the resumption of league action.