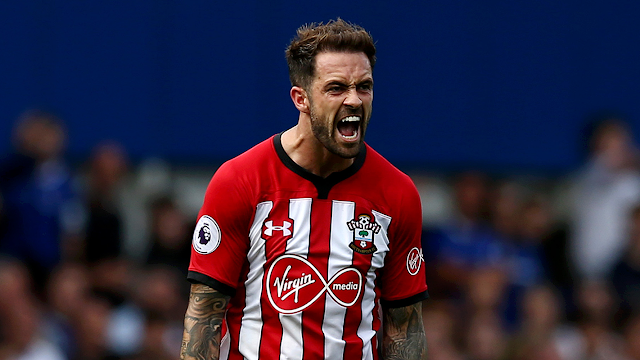 Southampton have suffered a blow ahead of their upcoming Premier League clash against Manchester United this weekend as striker Danny Ings is doubtful for the clash.
The 26-year-old continues to struggle with the hamstring injury that forced him off the pitch during Southampton’s 3-2 defeat against fellow strugglers Fulham last weekend.
The Saints are playing a poor brand of football at the moment. If manager Mark Hughes does not rectify the situation soon, he could be set to experience his second sacking in consecutive seasons after Stoke City parted ways with him last term when they were in a similar position.
Since arriving at St Mary’s on loan from Liverpool during the summer, Ings has started to find confidence in himself again. He has so far been one of the few shining stars in Hughes’s misfiring team as he has managed to thus far go on and score four goals from the 11 League encounters which he has featured in.
Though the Saints have been struggling, the game against United is one in which they can realistically aim to get points from. Jose Mourinho’s side have so far blew out and cold this season. They have struggled defensively at times and have also proven to be non-lethal in front of goal.
The Red Devils have so far been playing like a team that belongs in the mid-table. Hughes will be aware that his side will have a higher chance of getting something from the game should their star man Ings be available.
When discussing the status of the player ahead of the game, the former Manchester City and Blackburn boss said as per the Daily Echo:
“Danny will benefit from a good week’s work if we’re honest.

“That will give him a better chance for the weekend.”