“Thanks mate, it is your time now” – Legend’s advice continues to spur on West Ham star 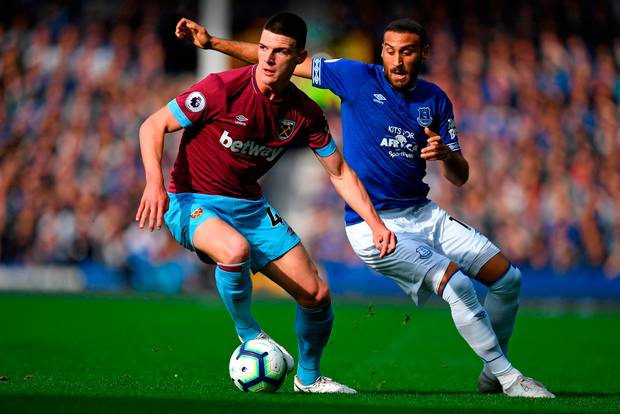 West Ham United centre-back and defensive midfielder Declan Rice is gradually growing into one of the club’s most important and best players following his breakthrough season last term.
The 19-year-old featured in 26 league games last season and is on course to beat that record having already played eight of the 11 games this season.
Rice has huge potential and can become one of the best players in the top-flight going forward, and it’s not surprising to see the Republic of Ireland and England both trying their best to lure him to their side.
His swift rise to the top at West Ham is an inspiration given that Rice was released by Chelsea at 14, and John Terry might have played a huge role in spurring on the youngster up till today.
The versatile youngster has revealed how the legendary Englishman was there to offer moral support five years ago and also as recently as a month ago.
“I based my whole game on John when I was younger. When I was released by Chelsea he called for 45 minutes and I remember I was sat in my room next to my dad,” Rice told The Times.
“It was John Terry – I could not believe it. He handed over all his experience and advice. He said to never stop, always keep working hard and give everything you have.
“It stayed in my head, and look where I am now. No dream is far away. I last met John for a two-hour breakfast with my cousin about six months ago. Sometimes I text him, like when he retired and he replied ‘Thanks mate, it is your time now.'”
Terry has been a huge source of inspiration for the West Ham Academy graduate, and it won’t come as a surprise if he goes on to become as influential and great as the former Chelsea defender.
It remains to be seen if the London club can hold on to their star and prized possession for much longer, and the current contract stand-off between club and player could end up haunting West Ham should one of the bigwigs swoop.

Despite the arrival of a handful of top summer signings, Rice has remained a crucial part of manager Manuel Pellegrini’s first-team plans, and the Hammers have to do anything within their power to hold on to their man.