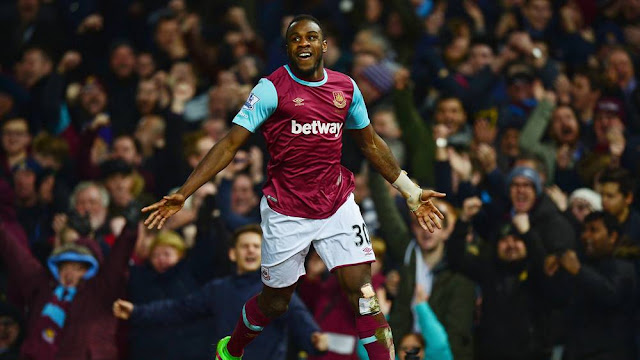 West Ham midfielder Michail Antonio has said that score-line of his sides 4-0 defeat against Manchester City on Saturday was not a true reflection of the way that they played.
The Hammers went into the game as the under-dogs and City completed a routine win as they look to win a second successive Premier League title.
One of the interesting facts which can be used in defensive of Antonio is that the Hammers managed to create nine attempts at goal, which was as many as the Citizens did. However, they were punished by the fact that they did not convert their chances while their opponents as usual were clinical in front of goal.
The game was all but over after 45 minutes as David Silva, Raheem Sterling and Leroy Sane all got their names on the scoresheet.
West Ham came out a better side during the second half and Antonio even managed to hit the post. Sane completed the rout by notching home his second goal of the game during second half stoppage time.
Despite what the score-line shows, Pep Guardiola’s team were far from the best during this game.
For West Ham however, improvement needs to be made if they want to have a good season. They have now just won once during their past several games.
While reflecting on the game, Antonio said as quoted on West Ham’s official website:
“The gaffer’s mentality is to ‘play like you’re a big team’, so it doesn’t matter who we’re coming up against, we’re believe we’re going to go out there and get the three points.
“We’re not going to sit back.
“I feel the tactics worked as there were loads of chances for us in the game, but they’re a quality team and they had four good chances and scored four goals.
“I don’t think Fabianski had a save to make in the game so, as I keep reiterating, we’ll take loads of positives from the game and take them into the next game.”