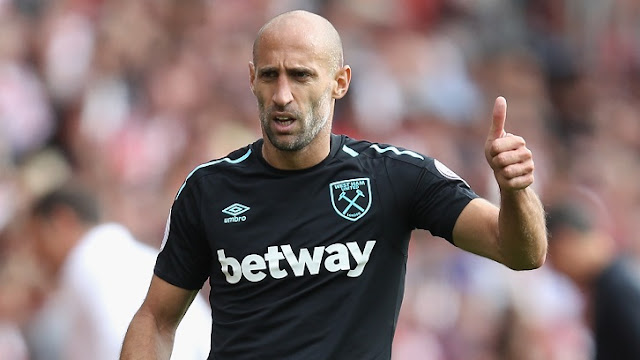 West Ham United youngster Grady Diangana has been a huge revelation in what is slowly appearing to be a breakout campaign for the 20-year-old.
The English forward was in sublime form over the weekend as the Hammers edged out a resilient Burnley side 4-2, assisting the second of Felipe Anderson’s brace, and veteran centre-back Pablo Zabaleta is full of praises for him.
“Grady seems to be looking very dangerous, especially when he is in one-on-one situations. He’s not scared and he shows personality to ask for the ball and to take people on and he looks very dangerous,” the Argentine told the club’s official website.
“Especially with the injury to Andriy Yarmolenko, the manager gave him a chance and he took it and he is showing that he wants to keep a place in the team, in the starting XI.
“As with all the young players, we need to make sure we give him the confidence. I’m playing behind him so I’m trying to keep talking to him all the time, telling him ‘no worries, next time’ if he loses the ball and giving him confidence. He looks very dangerous going forward and he will always produce something, whether it be a good pass or a dribble.”
Diangana was only making his second-ever Premier League start for the Hammers against the Clarets, but he put in an impressive shift that caught the eyes.
Since bagging a brace during the 8-0 EFL mauling of Macclesfield in September, the Academy Graduate hasn’t looked back, and he is slowly establishing himself in manager Manuel Pellegrini’s first-team plans.
The Chilean has started the youngster ahead of Michail Antonio in the games against Leicester City and Burnley, while he also preferred to substitute him on for the injured Yarmolenko against Tottenham.
With Diangana constantly delivering the goods, it is safe to say he is now ahead of the 28-year-old in the pecking order, and he only needs to continue putting in his best in order to remain in the first-team picture going forward.
West Ham have managed to pick up just 11 points in as many league games this season, and that’s not an impressive return given the heavy investment that went into the squad over the summer transfer window.
However, injuries have dealt a huge blow on the squad, but luckily enough for Pellegrini, Diangana has risen up to the occasion when handed the chance, and it’d be exciting to see how things pan out for the youngster going forward.
Written by Alani Adefunmiloye for Flaming Hairdryer.
Previous articleIs rarely-seen summer arrival finally close to making Rangers debut?
Next articleDid Aston Villa actually dodge a bullet following managerial target’s latest debacle?