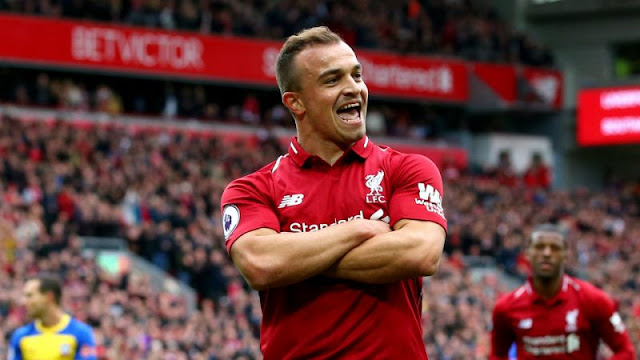 Liverpool face off against Wolverhampton Wanderers in the Premier League on Friday. Jurgen Klopp’s side will be looking for nothing less than victory from the game and will be hoping to retain their status as Premier League leaders.
Nuno Espirito Santo’s side are however one which cannot be taken lightly. During this season, Wolves have impressively managed to hold Manchester City to a draw and they also picked up a victory over Chelsea in the League.
Klopp’s side who are the only unbeaten side in the League currently will be heavily favoured to claim three points. The Reds will have to make changes to their starting XI from the one which defeated Manchester United 3-1 last weekend to keep all players fresh.
One player who should start against Wolves is Swiss attacker Xherdan Shaqiri. Many fans and pundits had doubts over whether Shaqiri was a good signing during the summer due to his tendency to be inconsistent.
However, the 27-year-old has so far proven to be an astute signing. He came off the bench last weekend against United and scored a brace for his side as they went on to win the game 3-1.
Shaqiri, who earns £90,000-a-week (Spotrac), should be fresh after his exploits for his side against the Red Devils and could terrorize the Wolves defence due to his confidence at the moment as well as his dazzling left-foot.
The Reds meanwhile enter a difficult two weeks which will see them face off against Newcastle United, Arsenal and Manchester City in the League.
Previous articleReal Madrid playmaker would be the perfect replacement for Ozil at Arsenal
Next articleLeeds must sign former Arsenal star to aid Premier League survival if promoted

Liverpool in recent times has been impenetrable at the back. Their rock-solid defense has been the key that has unlocked multiple triumphs for them. Now,...
Read more
Manchester United

As we head into the final days of the summer transfer window, the trio of Premier League clubs are eyeing move for Daniel James...
Read more