Arsenal should aim to reunite with former fan-favourite Cesc Fabregas 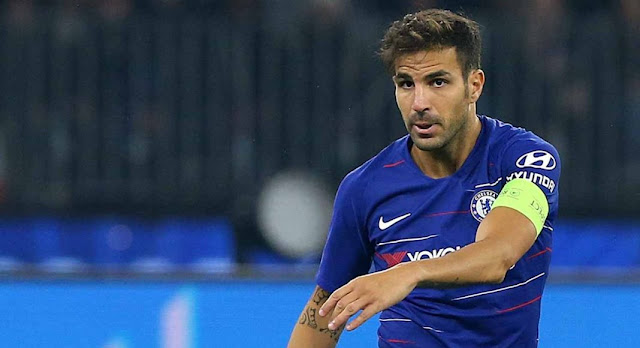 Chelsea midfielder Cesc Fabregas’ current contract with the Blues is set to expire in January. As it stands, the Spaniard has yet to agree to fresh terms at Stamford Bridge, meaning he is on course to becoming a free-agent at the end of the season.
As it stands, AC Milan are heavily linked with Fabregas but it remains to be seen what will happen. With his Spain career seemingly over, he may just opt to spend time in the financially lucrative and less demanding Leagues of the Far-East or the US as he approaches the latter years of his career.
However, Arsenal should make a move for Fabregas. Here are reasons why Unai Emery’s side should make a move to sign the clubs former fan-favourite.
Fabregas still can offer a lot
His best years may be behind him but Fabregas is still a quality passer of the ball and has another 3-4 good years of football left in him. The Gunners midfield is set to experience a major blow at the end of the season with Aaron Ramsey set to depart the club. Fabregas with his great creativity on the ball could be a suitable replacement for the Welshman.
Fabregas will bring renewed optimism to the club
Before leaving the Gunners to join Barcelona in 2011, Fabregas was arguably the club’s most popular player. As a youngster, he helped the club to win the FA Cup during the 2004/05 season but never won a major trophy once he had established himself as a world-class player.
It was rather unfortunate that Fabregas’ best years at Arsenal coincided with the height of the club’s 9-year trophy drought under Arsene Wenger between 2005-2014.
Arsenal look vastly improved this season under Emery and capable of launching challenges for major trophies. It would be fitting for Fabregas to come back to the club and help them to lift a major honour.

As he was adored by most fans of the club, it would also bring joy to the fans, similar to what was experienced when Thierry Henry came back to the club on loan from the New York Red Bulls in 2012 when the club experienced an injury crisis with their attackers.

Raheem Sterling has signed a five-year contract with Chelsea after leaving Manchester City. The England international has been a significant contributor for Manchester City over...
Read more
Arsenal

Arsenal defender Rob Holding has previously been linked away with a move from Arsenal but the North London club boss Mikel Arteta has told...
Read more