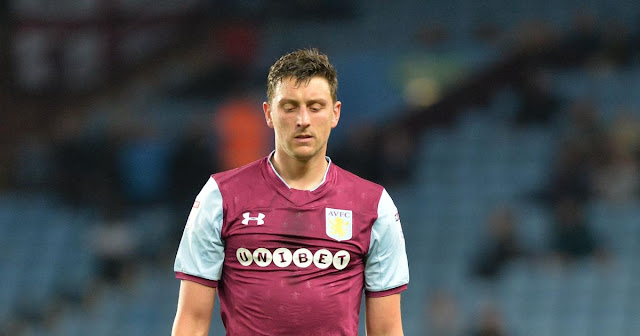 Aston Villa manager Dean Smith believes that Tommy Elphick will help to bolster his sides defence after returning from a loan spell with Hull City.
The 31-year-old was loaned out to the Tigers last summer and not many would have expected him to return to the Villains. It is rare that a player over 30 is loaned out and brought back to the club. Elphick did manage to play regularly and made 18 Championship appearances for the Tigers, scoring one goal.
Villa have been short of options following a recent injury crisis and this could be behind the decision to recall Elphick. Youngster Axel Tuanzebe is currently out of action due to a foot injury while Neil Taylor is also missing due to a hamstring problem.
Elphick will be eligible to play during Villa’s home clash against QPR on New Years Day.
As reported by The Express and Star, Smith said of Elphick’s return:
“It will be nice to have him back and we have exercised the option to bring him back. It will bolster us defensively
“We have three right-backs playing in the back four at the moment. Chessie (skipper James Chester) has had a grumbling knee for a while and has been soldiering on. Our only fit centre-back has been playing for Hull City.”
Meanwhile Villa will need to hope that Chelsea do not decide to recall striker Tammy Abraham. Abraham has been in magnificent form this season and has been linked with a move to a few Premier League clubs.
The Blues could also decide to recall him to provide depth to their squad after Olivier Giroud was injured while playing against Crystal Palace on Sunday.
Previous articleWest Ham must move for English sensation to replace Andy Caroll
Next articleLeeds suffer double injury blow ahead of Nottingham Forest clash