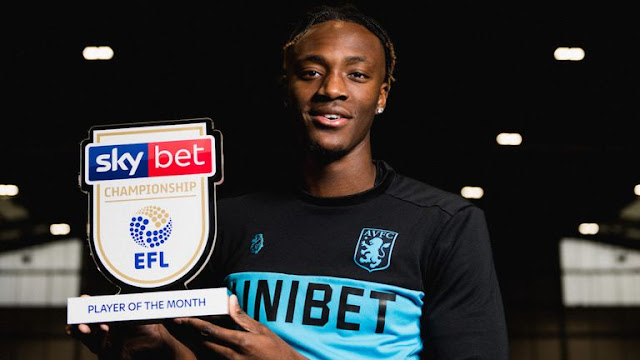 After starting the season in poor form, Aston Villa have improved remarkably since Dean Smith was appointed as manager of the club following the sacking of Steve Bruce.
The Villans are now serious contenders to challenge for promotion to the Premier League next season. One player who has shined under the guidance of Smith is on-loan striker Tammy Abraham.
Abraham has so far scored 11 goals this season and at the time of writing he bagged the Championship Player of the month for his heroics in November.
Abraham managed six goals in four games last month. He managed goals against Derby County and Birmingham City before finding the back of the net four times during the thrilling 5-5 draw with Nottingham Forest.
Recent reports have suggested that Chelsea may consider recalling Abraham from his loan spell with Villa during the January transfer window. The Blues have so far played an impressive brand of football under Maurizio Sarri for the most part.
However, the one major weakness within the team is a lack of a prolific goal scorer to lead the line. Olivier Giroud and Alvaro Morata certainly do not look like they are strikers whom one can rely upon to win games on a regular basis.
It is vital that Villa aim to keep Abraham if they want to boost their chances of winning promotion back to the top-flight next season. The man who can play a big role in ensuring that Abraham remains at Villa Park is Chelsea legend and current Villa assistant manager John Terry.
Previous articleWhy Burnley man would boost Aston Villa’s promotion hopes
Next articleFormer Crystal Palace owner slams Paul Pogba as “he’s all myth”

Raheem Sterling has signed a five-year contract with Chelsea after leaving Manchester City. The England international has been a significant contributor for Manchester City over...
Read more
Aston Villa

Aston Villa have announced that Jack Grealish has signed a new five-year contract, ending all speculation about the English footballer’s future at Villa Park,...
Read more