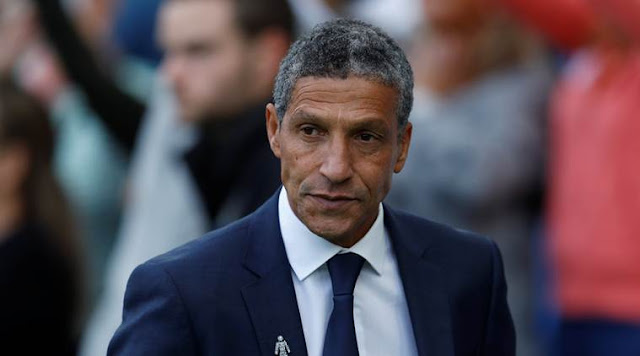 Brighton boss Chris Hughton has claimed that his side are capable of winning when they play against Chelsea in the Premier League on Sunday.
Chelsea will go into the game as the firm favourites to claim three points. Even though they will be playing away from home, Maurizio Sarri’s side are on a high after defeating Manchester City 2-0 last weekend. City’s defeat was their first in the League this season and enabled Liverpool to overtake the Cityzens as the leaders on the Premier League log.  The win would have been a major confidence boost for Sarri’s side and leaves them in 4th position on the standings and 8 points adrift of leaders
Brighton meanwhile are coming off a narrow 1-0 defeat against Burnley which they experienced on Saturday. The Seagulls however must go into the game against the Blues with confidence. The Blues have recently experienced two defeats against the likes of Tottenham and Wolves which proves that they can be outdone.
As quoted by The Argus, Hughton said:
“We should do (approach the game with confidence) because we are on the back of a really good performance in our last home game and it was a good enough performance at Burnley to get something.
“It will be a big crowd. If I look at our performances, Tottenham was close, United we were able to beat.

“We will have to pull out the type of performance we have in the past against the big clubs.”
Previous articleFrustrated Mo Diame comments following Newcastle’s loss against Wolves
Next articleEverton’s promising on-loan player admits that he could leave club

Chelsea have turned down Inter Milan’s bid for N’Golo Kante that involved Marcelo Brozovic as a makeweight, according to 90MIN. The 29-year-old suffered an injury...
Read more
Chelsea

The general assumption of Chelsea supporters may be that the new £50 million signing Timo Werner will get the starting number nine role when...
Read more