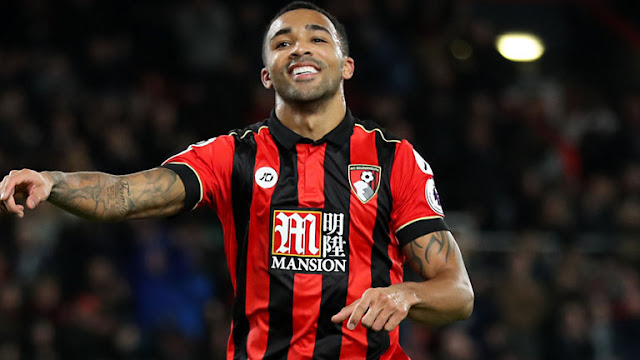 Bournemouth manager Eddie Howe has suggested that his club will hold onto striker Callum Wilson amidst interest from Chelsea.
The 26-year-old Wilson has been in superb form so far this season and has gone on to bag eight Premier League goals and five assists from 15 games. His form has helped him to force his way into the England national team for whom he scored on debut against the United States.
Wilson has been strongly linked with a move to Chelsea. The Blues lack a prolific goal scorer with both Alvaro Morata and Olivier Giroud struggling to find the back of the net on a regular basis. Wilson has won over many admirers this season and many Chelsea fans would certainly love to see him joining their club.
Surely as a professional who is approaching the peak of his career, Wilson would have ambitions to experience European football. Bournemouth fans will however be hoping that the club does not sell the striker anytime soon.
Howe thinks that his club will hold onto their prized asset.
As quoted by Goal, Howe said when asked whether his side will manage to keep Wilson: “Yes, we are (confident),”
“At this stage we are just focusing on the matches, we have got so many games to come around the Christmas period, I am sure Callum is the same, he is focusing on his football.

“We are certainly not anticipating losing players in January that we don’t want to.”

Chelsea have turned down Inter Milan’s bid for N’Golo Kante that involved Marcelo Brozovic as a makeweight, according to 90MIN. The 29-year-old suffered an injury...
Read more
AFC Bournemouth