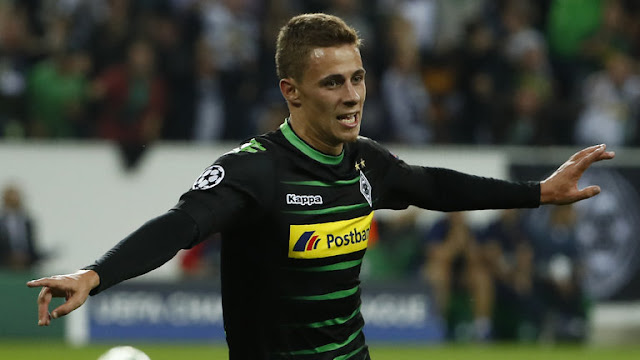 One of the players whom Chelsea should aim to re-sign soon is Borussia Monchengladbach’s Thorgan Hazard. Thorgan who is the brother of Blues ace Eden Hazard has been in sensational form in the German Bundesliga this season.
The 25-year-old has so far scored eight goals and recorded six assists for Monchengladbach who currently occupy second spot on the German top-flight standings.
Thorgan is not unfamiliar with the Blues setup. Even though some fans may not be aware of it, he spent three years affiliated to the club between 2012-2015. During that time, he was sent out on loan and never managed a single Premier League appearance for the club.
Thorgan is able to operate as a winger or as a number 10. With Pedro and Cesc Fabregas now aging and past their peak, he could be a good replacement for one of the Spaniards. Thorgan has been able to create and score goals on a regular basis this season and has shown that he is more than capable of playing for an elite club of world football.
He is one of the best passers in the Bundesliga and this has had a big role to play in the attractive style of play that Monchengladbach have played this season.
Eden Hazard is also constantly being linked with a move away from Stamford Bridge. Who knows, maybe he may be tempted to sign an extension with Maurizio Sarri’s side if he gets the chance to dominate the midfield alongside his brother.

1 thought on “Chelsea should aim to sign Bundesliga sensation”