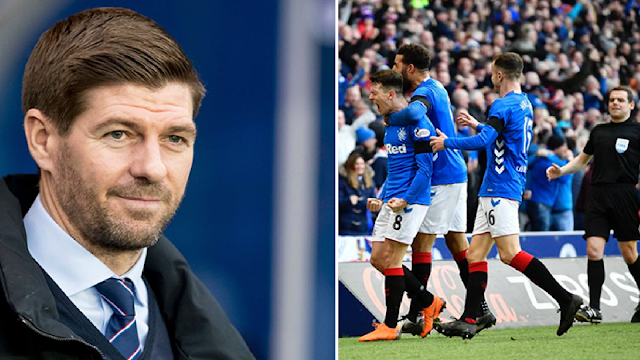 Rangers stunned arch-rivals Celtic in the Old Firm derby on Saturday as they pulled off a 1-0 win with Ryan Jack scoring the only goal of the game.  This win would have been special to many fans of Steven Gerrard’s team as it was the first time since 2012 that they have beaten their rivals in the League.
The win sees the Gers move level on points with the Hoops, albeit having played one game extra. Brendan Rodgers side still remain at the top of the standings due to having a superior goal difference.
Rangers were largely the better side throughout the game and deserved the three points. Jack scored during the 30th minute of the game after he beat Craig Gordan following a deflection from Celtic veteran Scott Brown.
The Hoops very rarely looked threatening to the Gers but they did have a goal rightfully disallowed after Callum McGregor managed to find the back of the net from an offside position.
Rangers dominated the midfield duels with Jack, Ross McCrorie and Scott Arfield all exerting their authority. The Hoops backline did not look very solid in the absence of key-man Kieran Tierney.
Sutton took to social media platform Twitter to express his thoughts after the game and said:
“Well done Steven Gerrard and Rangers for the 1st win in 90 minutes v Celtic since 2012 ….the best team won…Celtic worst performance of the season… work to do in January.”
Previous articleMarcelo Biesla remains upbeat following Leeds United’s loss
Next articleWest Ham must move for English sensation to replace Andy Caroll

Celtic in the transfer race for Finnish player Jere Uronen

Scottish giants Celtic are reportedly eyeing a move for Finnish footballer Jere Uronen to bolster their ranks this summer. According to TuttoMercatoWeb, the Bhoys are...
Read more
Celtic

Celtic defender joins Turkish side on loan after coronavirus breach

Celtic have announced that their defender Boli Bolingoli has departed Glasgow to join Turkish side Istanbul Basaksehir on loan for the 2020-21 season, as...
Read more
News