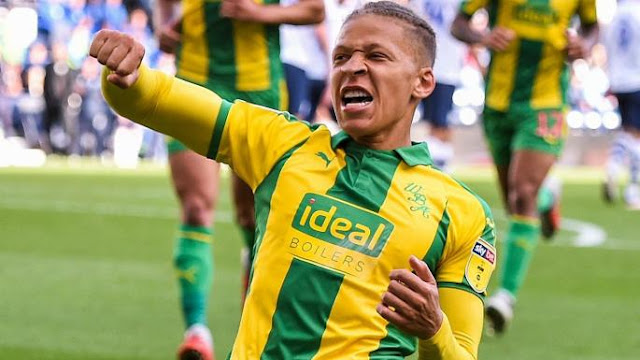 Newcastle United striker Dwight Gayle who is on loan with Championship club West Brom has hinted that he could see himself staying with the Baggies.
Gayle moved to the Baggies during the summer transfer window in a deal which saw Salomon Rondon move the other way around also on loan.
Gayle was prolific for Newcastle during their 2016-17 season in the Championship. He scored 23 goals from 32 games that season to help the Magpies win instant promotion back to the Premier League.
However, he was less than impressive last season for the Toon Army in the top-flight as he went on to bag just six goals from 35 appearances.
Upon returning to the Championship with West Brom this season, Gayle appears to have once again found his touch. He has so far netted 13 times from 20 games for Darren Moore’s promotion chasing side who currently occupy third position on the Championship standings.
After 24 games in the second-tier, the Baggies are just three points adrift of Norwich City who occupy second place and six points adrift of first place Leeds United.
He said as quoted by Express and Star when asked if he will be staying with West Brom
“I don’t know really, it could be on the cards.
“For me the most important thing is getting promoted this season and finishing in the top two.
“We all know what we’ve got to do and we’ve got a lot of hard work before the end of the season to do that. I’m loving it here at the moment and hopefully that continues.”