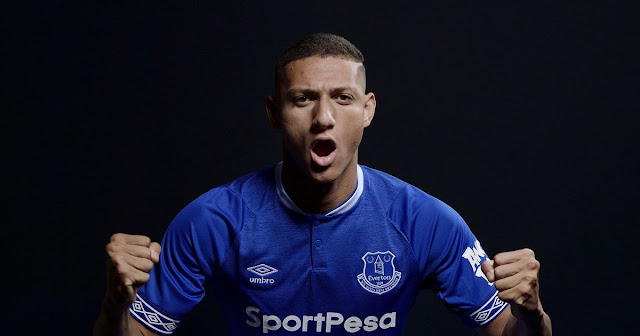 Everton favourite Yakubu believes Richarlison has the credentials to become one of the top strikers in the world after displaying an impressive run of form since making the switch to Goodison Park over the summer. The Brazilian footballer was purchased from Marco Silva’s former side Watford during the previous transfer window but they were question marks raised after the £35m package spent to lure him from the Hornets.
However, the versatile forward has lived up to the expectations with eight goals already from just 15 matches in the Premier League and speaking to the club’s official website, Yakubu has been full of praise for the former America Mineiro graduate, he told: “Richarlison is smart and clever. I have watched him since he was at Watford. If he continues to do what he is doing, you will see the improvement.

“He is going to be a top striker. I think he can be right up there in the goalscoring charts.”
Richarlison had initially started the season on the left side of the attack but over the past few months, Silva has transformed the Brazilian into a centre-forward which has paid dividends with the forward getting onto the scoresheet more often. Meanwhile, the 21-year-old has also made a mark with the Brazilian national team following his debut in September and he has already contributed three goals from six caps including the first-half winner over Cameroon during the recent international friendly.
Based on the performances, Richarlison’s form is sure to attract interest from some of Europe’s elite and the Toffees’ next step would be to match the ambition of the attacker and push for potential European football. Should this not the case, the Merseyside outfit could face a stiff task of keeping hold of the upcoming star, who is currently on the radar of Premier League giants Chelsea.
Previous articleWhere is former Everton player of the season Steven Pienaar now?
Next articleRobert Snodgrass reveals reasons behind West Ham’s revival