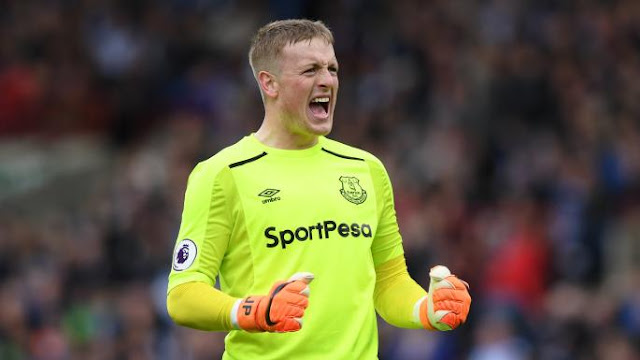 Everton goalkeeper Jordan Pickford has said that his side can be proud of the performance which they gave during their 2-2 draw against Watford on Monday.
Richarlison opened the scoring for the Toffees during the 15th minute of the game and notched his eighth League goal of the season. However, Watford took the lead within two minutes during the second half as Seamus Coleman scored an own goal during the 63rd minute before Abdoulaye Doucoure struck during the 65th minute.
The Hornets looked on course for victory before Lucas Digne struck a wonderful free-kick during the 96th minute to rescue a point for Marco Silva’s side. The result leaves the Toffees in 7th place on the standings with 24 points and two points adrift of 6th place Manchester United.
The Merseysiders have been playing an impressive brand of football this season under Silva and can set themselves a target of challenging for European football.
Pickford feels that his team-mates can be proud of their performance against the Hornets. As quoted by the Official Everton website, he said: “Watford are a strong, physical side and probably beat us on the first and second battles,”
“We had good spells, good chances and got the first goal but we know how good Watford are. They had a good start to the season and we had to be aware of that.
“They got two goals in five minutes and we had to reset and to be resilient. Unfortunately Gylfi missed a penalty but that’s football and you’d back him to score the next one. But we never say die and we managed to claw one back and if you can’t win then don’t get beat.
“It shows our resilience as a squad and we’re confident we will keep getting better and better.

“We maybe dropped two points but we’ve got a point and we move on to Saturday. It was a great free-kick by Lucas. He’s stepped up in the 95th minute and put it straight into the top bin. We can take encouragement from that.”
Previous article‘Need more players like him’, Everton fans on Twitter rave about star’s performance
Next articleFrustrated Mo Diame comments following Newcastle’s loss against Wolves