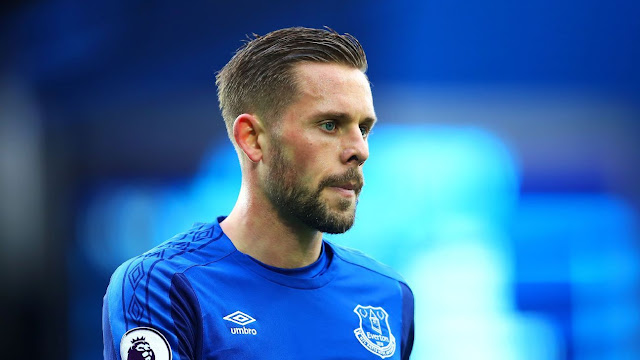 Everton star Gylfi Sigurdsson is pleased with the signings that his club made during the summer transfer window.
The Toffees have been playing an impressive brand of football this season under Marco Silva and could potentially challenge for European football next season. They were also on the verge of holding new League leaders Liverpool to a draw two weeks ago but were unlucky following Jordan Pickford’s uncharacteristic error which gifted Divock Origi with the winning goal during the 96th minute of the game.
The Toffees had a busy transfer window as they brought in the likes of Richarlison, Bernard, Lucas Digne, Yerry Mina, Kurt Zouma and Andre Gomes.
So far, the two most impressive of the signings have been Richarlison and Bernard. The Toffees attack has been revitalized by the Brazilian duo after it struggled last season due to the departure of Romelu Lukaku to Manchester United during the summer of 2017.
Richarlison has impressed so much that he is now a part of the Brazilian national team. The Merseysiders could face a tough time to keep the youngster at the club beyond next summer as he has reportedly also attracted interest from a number of clubs who play in the Champions League.
Sigurdsson has lauded his new team-mates and as quoted by the Everton official website, said: “The new players have been fantastic,”
“They have helped us score lot of goals, with a lot of creativity going forward and speed.
“I think all the players who have come in – not just the attacking players, the centre-halves and Lucas as well – have been fantastic and fitted in really well.
“They suit the way the manager wants us to play. I think if you ask any of the players, they are enjoying working with the new manager.
“He wants us to play attacking football, to work hard without the ball and press.

“There is a good understanding within the players. It feels natural playing with the guys now and that comes with the work we’ve been doing on the training pitch.”