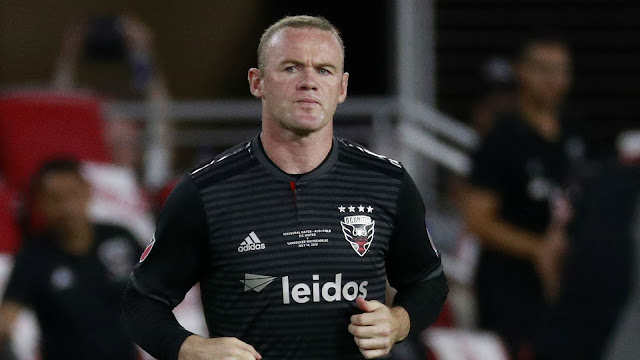 Former Everton and Manchester United sensation Wayne Rooney has hinted that he would like to manage Manchester United one day in the future. The 33-year-old Rooney is currently on the books of MLS side DC United after leaving Everton last summer.
He moved to the Toffees for one season during the summer of 2017 after falling down the pecking order at Manchester United during the 2016-17 season.
Though Rooney was still able to play competitively in the Premier League with his boyhood club Everton last season, he simply seemed to lack motivation on the field and got involved in a few negative off the field incidents which would have caused him emotional anguish.
He definitely did the right thing by moving to play in the less physically demanding American League. Moving to the US (where football is not a widely revered sport) would have also given him the opportunity to rebuild his life and be away from intense public scrutiny for a while.
In rather surprising news, Rooney has now indicated that he would like to go into football management after he retires and possibly manage Manchester United.
As quoted by The Sun, he said:
“Yeah of course. I’m doing my coaching badges. It’s something I’m passionate about.
“Football is what I know, what I grew up with. It would be foolish if I didn’t try and go into coaching.
“If I’d like to manage Manchester United… of course! One day that would be my absolute dream if that could happen. It’s a massive club.
“I’m sure Ole isn’t giving us his true feelings but I’m sure deep down he is absolutely ecstatic.
“For any player who has played for Manchester united, to have the opportunity to manage them would be an absolute honour.
“Football is what I’ve done since I was a child, getting in the first team at 16. That’s what I know. I’m not going to sit here and say I’m going to go into an office or be an agent.”