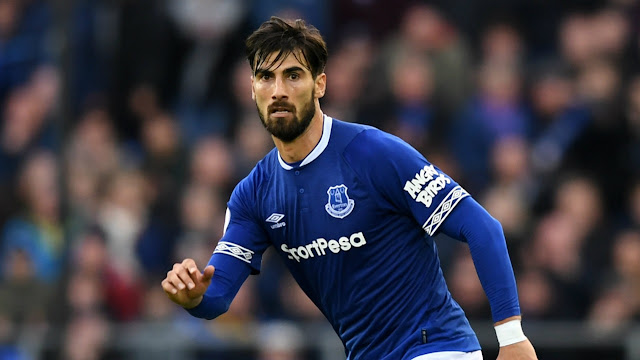 Everton sporting director Marcel Brands has confirmed that the club are scheduled to hold discussions over a permanent deal for Andre Gomes once the winter transfer window concludes.
The Portugal international joined the Toffees from Barcelona on a season-long loan before the summer transfer deadline and he has since integrated into the Toffees setup, making 11 appearances across all competitions.
Speaking to The Liverpool ECHO, Brands acknowledged that the Toffees have plans in place to discuss a permanent move for the Euro 2016 winner, although the move may be dependent on the ambition of the midfielder himself, he said:
“It is more depending on the player. After the January, we will talk, first, with the player and the key is with him. We are happy with him but you never know what is going to happen. The most important thing is that he wants to stay.”
Gomes did not feature for the Toffees during the opening two months of the campaign as he was struggling from a hamstring problem incurred with the Blaugrana during their pre-season tour of the United States.
However, since his comeback, he has been ever-present at the heart of the midfield and has completed the entire 90 minutes in eight of the 11 league matches.
Meanwhile, in the same interview with ECHO, Brands highlighted that he does not fancy spending during the winter transfer window from his time at PSV Eindhoven and suggested that the option is usually taken by clubs who are struggling with numerous injury concerns.
Everton are currently eighth on the table with 27 points on the board and they have the opportunity to enter the New Year on a winning note when they entertain Brighton & Hove Albion on the road.
Previous articleEverton manager Marco Silva has bright vision following Burnley win
Next articleFabinho and Salah start, Strongest Predicted Liverpool lineup (4-3-3) to face Arsenal