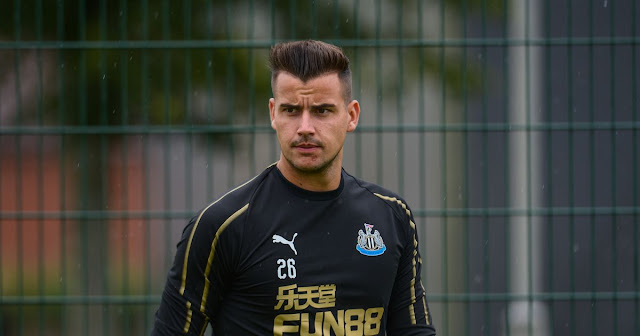 Leeds United have been dealt a blow ahead of the January transfer window has Newcastle manager Rafa Benitez has indicated that he will not be allowing goalkeeper Karl Darlow to leave the Magpies.
The Whites are looking to bring in a new goalkeeper during the January transfer window as they look to win promotion to the Premier League and the 28-year-old Darlow had been strongly linked with a move to Elland Road.
Darlow would have been a useful edition to Marcelo Biesla’s side as he has plenty of Championship experience, having been Newcastle’s first-choice keeper during their second-tier winning 2016-17 season.
Darlow started off as Newcastle’s first-choice keeper last season but ended up losing his place in the team to Martin Dubravka following a series of inconsistent performances.
He has yet to make a single Premier League appearance this season and will surely be looking to leave St James Park soon in order to revive his career.
It now appears that Benitez will not let Darlow leave in January, however he will let Rob Elliot leave. As reported by popular Newcastle Journalist Lee Ryder, Benitez said:
“We are not really interested in selling anyone. The only one (goalkeeper) that is available in the window is Rob “
One goalkeeper who Leeds should try to sign is Burnley’s Tom Heaton. Heaton is a quality keeper who is currently third choice for the Clarets behind Joe Hart and Nick Pope.
He is perhaps one of the unluckiest keepers in England right now and is certainly capable of starting as a first-choice for many Premier League clubs.
Previous articleWest Ham should aim to sign Spurs £26k-a-week player in January
Next articleMarcelo Biesla remains upbeat following Leeds United’s loss

New owners took over Newcastle United in October 2021, which then increased the excitement level of the fans by dreaming of many new signings....
Read more
Leeds United

Leeds are reportedly in talks with French side Toulouse for signing their talented midfielder Manu Kone. According to a report from RMC Sport, the West...
Read more