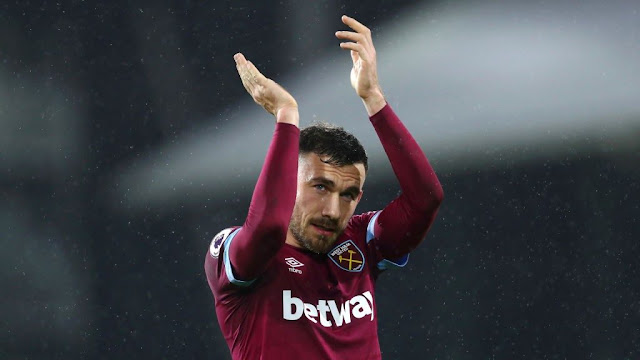 West Ham United midfielder Robert Snodgrass has indicated that his club has managed to undergo a revival because of the way in which manager Manuel Pellegrini demands the best out of all his players.
After the club chose not to renew ties with David Moyes last summer, former Manchester City boss Pellegrini was appointed to lead the club. The Chilean initially struggled to infuse his style of play within the team and the Hammers lost their opening four games of the Premier League season. Some had even suggested that Pellegrini would not last long at the helm of the club.
However, the East Londoners are currently playing an impressive brand of football and are currently in ninth position on the League standings, just two points adrift of sixth place Manchester United. If they continue to win games over the coming weeks, Pellegrini can realistically set a target of Europa League football for his troops next season.
Snodgrass has also been a player who has undergone a revival under Pellegrini. The Scot arrived at the club in January 2017 from Hull City under Slaven Bilic. He did not establish himself at the club and was sent out on loan to Aston Villa during the summer of 2017.
Some would have certainly expected that Snodgrass would never again play for the Hammers considering the way in which he failed. Pellegrini chose to keep Snodgrass in his first-team plans for this season. The 31-year-old has impressed, scoring four goals and three assists in 19 appearances [Whoscored] across all competitions so far.
As quoted by the West Ham official website, Snodgrass said:
“I’m just playing where and how the manager wants me to play. He speaks to me a lot about every position and that’s what you want as a footballer. He tells me how I can be better in each position and he’s a perfectionist. He’s been at the top level for a reason and I think we’re starting to see his ethos in the way we’re playing.
“He does it with every player. Everyone. He wants to try and help everyone become better. He’s speaking with them all. It’s why the boss has been at the very top, because he talks with his players and he wants to get the best out of them.”