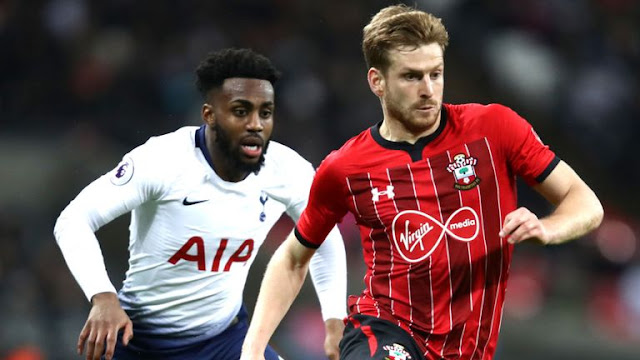 Tottenham defender Danny Rose has suggested that manager Mauricio Pochettino deserves to be linked with the likes of Manchester United and Real Madrid.
The Argentine was appointed as manager of Spurs in 2014. He has yet to win his first major trophy at the helm of the North London side, however, he has transformed them into one of the best team’s in England.
Pochettino nearly led Spurs to Premier League glory during the 2015/16 and 2016/17 seasons. He has also established the club as one which regularly qualifies for the Champions League. Many neutrals did not expect much from Spurs this season after they failed to make a single signing during last summer’s transfer window. However, they have been playing an impressive brand of football this season as they languish in third position on the Premier League standings and are six points adrift of leaders Liverpool.
They also booked their place in the last 16 of the Champions League this week after edging out Inter Milan based on their better head to head record.
Rose feels that Pochettino deserves to be linked with the likes of Madrid and United due to his managerial abilities. The Englishman said as quoted by The Guardian:
“It’s no coincidence that every day you read Real Madrid want him or United want him.
“It’s exactly what he deserves. What he has done here in the last four or five years has been amazing. He has transformed how others think of us outside the club and he has transformed how we think of ourselves and how we approach big games.

“The belief he gives everybody is just amazing. For example, Kyle Walker-Peters made a mistake in Barcelona but it will not affect what the manager thinks of him. He will stick with Kyle no matter what. That’s the sort of man he is: once you win his trust it will take an awful lot to break that. He has been amazing for myself and this club, and we hope he is here for a very long time.”
Previous articleFormer Everton star Andrei Kanchelskis makes exciting prediction for fans
Next articlePochettino makes exciting statement for Tottenham fans

As we head into the final days of the summer transfer window, the trio of Premier League clubs are eyeing move for Daniel James...
Read more
News

Portuguese boss Jose Mourinho praised Giovani Lo Celso’s performance in their 5-2 victory over Southampton, and he explained why he decided to substitute Tanguy...
Read more