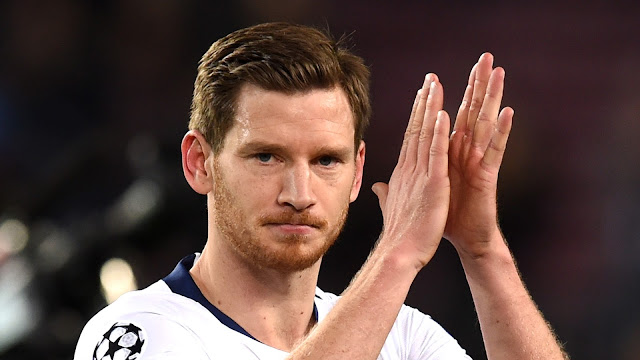 Tottenham have triggered the option to extend Jan Vertonghen’s contract at the club. The Belgian’s contract with the club was due to expire at the end of this season but he will now remain with the North London giants till 2020.
The 31-year-old Vertonghen is a top quality defender and one of the best in the Premier League. Spurs have done the right thing by extending his stay with the club.
Since moving to Spurs in 2012, Vertonghen has been a first-team regular and is now a leader within the team. His coming to the club also coincided with its transformation into one of the best team’s in England.  He was also brilliant last season and was included in the PFA team of the year.
The £100,000-a-week defender (Spotrac) has formed a formidable partnership with fellow Belgian Toby Alderweireld in defence for the Lilywhites this season.
Though Davinson Sanchez has shown that he will be a potentially good replacement eventually for Vertonghen, the Belgian is still better than the youngster at this point in time.
Tottenham stated in an official statement:
“The club can confirm that we have activated the option to extend Jan Vertonghen’s contract until 2020,”
“The Belgium international has made 264 appearances for the Club since joining from Ajax in 2012.
“He was rewarded for his fine form last season with a place in the PFA Premier League Team of the Year and the One Hotspur members’ Player of the Season award.
“Jan also recently became the most capped player in Belgium’s history with 110 appearances for the Red Devils.”