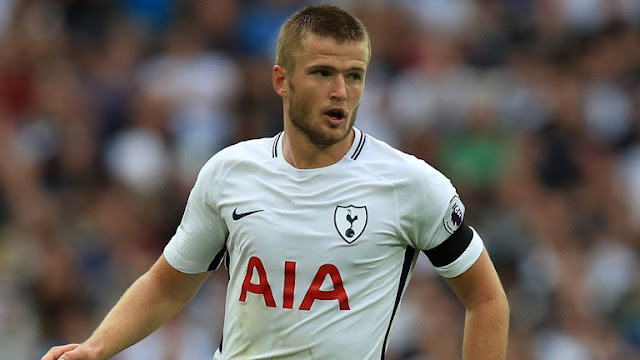 Tottenham midfielder Eric Dier has insisted that there is no reason for his club to panic following their 4-2 defeat in the North London derby against Arsenal on Sunday.
Unai Emery’s side got the better of Spurs on the day and deserved the win through a brace from Pierre-Emerick Aubameyang coupled with goals from Alexandre Lacazette and Lucas Torreira.
The defeat is nothing to be ashamed off as it came against one of the most in-form sides in the Premier League.
However, Mauricio Pochettino’s side would have been hoping for better especially as they had come into the game on the back of a 3-1 victory against Chelsea last weekend. The loss for Spurs means that Arsenal leapfrog them into fourth place on the League standings, albeit only on goal difference as both sides have 30 points apiece.  Spurs would also have been disappointed by the way that they allowed Arsenal to come back once they led the game 2-1. Eric Dier equalized during the 30th minute before Harry Kane converted from the spot four minutes later to put the Lilywhites in the lead.
However, Aubameyang scored his second during the 56th to bring the Gunners level before Aaron Ramsey took advantage of some unconfident defending from Juan Foyth to put the Gunners ahead during the 74th minute and Lucas Torreira completed the scoring during the 77th.
The loss for Pochettino’s men also means that they are now eight points adrift of table toppers Manchester City and six adrift of second placed Liverpool. It will definitely do their hopes of finally winning the top-flight this season a blow.
After the game, Dier said as reported by The Standard:
“We weren’t good enough, they [Arsenal] were better than us,”
“It’s hard to say why so soon after, but they deserved to win. It’s football and there’s so long to go.
“We’re very confident in ourselves and we were in the same position in the league after we came here [last season], so let’s see what happens.”
“We had a very good start against Chelsea [in a 3-1 win] last week.

“But we’re inconsistent with it. We want to enter every game in the best possible shape. Sometimes we can, sometimes we can’t. We need to improve in everything and that’s just another thing, really.”

Previous articleRay Parlour: Arsenal should have opted to sell Mesut Ozil and keep Aaron Ramsey
Next articleFormer Everton and Man United boss would be ideal man for Southampton manager role