Who is Zach Steffan? The few things you need to know about Man City’s new signing 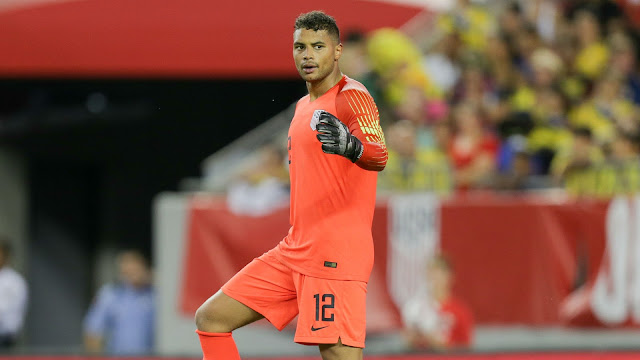 Goalkeeper Zach Steffan is set to join Manchester City next summer. The long-term injury to Claudio Bravo has meant that City boss Pep Guardiola has had to use Arijanet Muric as his second choice.
Muric may well be a quality keeper in his own right but he lacks the necessary experience to be considered as cover for a club of the stature of City.  The 20-year-old spent the second half of last season on loan with Dutch club NAC Breda and went on to make just one appearance.
He has made three appearances in the League Cup this season for City and has been solid. However, he will not be an ideal candidate to be between the sticks for the Citizens in the Premier League should Ederson suffer an injury or pick up a suspension.
Zach Steffan is a talented up and coming keeper and could go on to achieve great things in the future. The American who plays for MLS Club Columbus Crew was recently named as the 2018 USSF Male Soccer Player of the Year and became the youngest keeper to win the award.
He joins the likes of well-known American footballers Brad Friedel, Tim Howard and Kasey Keller in winning the award. Steffan boasts six caps for the US national team and has kept two clean-sheets in the process.
He would certainly provide good back-up to Ederson. Guardiola’s side can also look to offload Bravo who has proven to be a flop since his arrival at the Etihad Stadium in 2016.
Previous articleSteven Pienaar delivers message to Everton
Next articleDwight Gayle hints at permanent move to West Bromwich Albion

Lionel Messi is determined to depart Barcelona this summer, however, the star player wants to meet the board and leave Camp Nou on good...
Read more
Manchester City

Zinchenko responds to his bride’s criticism of Manchester City boss