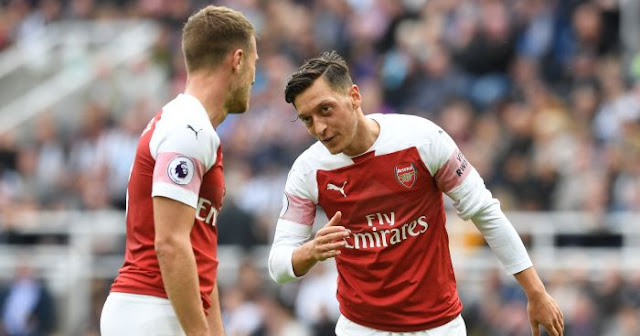 German playmaker, Mesut Ozil is one player that has divided opinion for all of his career. Despite his remarkable number of assists since he began his professional career, the classy No. 10 is one player that not all football lovers share an undisputed opinion about. This season under Unai Emery at Arsenal, Ozil has gone from being a first team regular to a player that the coach doesn’t even find a place for on the substitutes bench.
Ozil only signed a new contract at the club last winter after it appeared that he would be leaving on a free come the summer of 2018. The signing of a new and improved £350k per week deal was seen as a victory for the club. First, it showed that the Gunners still has the clout to attract a host of the best players in the world and it also helped soothe the pain of losing Alexis Sanchez. However, since that time, Ozil has become a dispensable member of the team.
Here are 3 reasons the Arsenal board should sanction his move away from The Emirates in the January transfer window:
He doesn’t fit Emery’s style
Unai Emery seems to have graduated from the Marcelo Bielsa school of management. He is a proponent of a mix of high-pressing, possession and intermittent octane football currently employed by many managers at the moment. Ozil naturally is a laid back player that only cherishes the time when he’s on the ball and the last few months under the tutelage of Emery, Arsenal have shown that they can mix brawn and brain, a combination that is clearly missing in Ozil.
The more damning fact for Ozil is that in between the 22-game unbeaten run the Gunners went on, he was not an indispensable member of the first team.
His age
At 30, Ozil is entering the declining period of his football career and for a player that is not especially known to go the extra mile to improve his body conditioning, the only way down for him is down. While his quality is not in question, Arsenal must start looking at his re-sale value. Not many top clubs will pay over the odds for him, and will instead opt for younger, dynamic more energetic players who can benefit the team long-term. With Arsenal looking to have Unai Emery for a while, Ozil should be sold for a moderate fee with the fee used to bring in a player that suits the demands of the manager.
His wages
When Mesut Ozil signed a £350k-a-week deal last winter, no one would have felt that he would become dispensable just a year on. There is no point paying him such huge wages if he won’t be playing. Firstly because it doesn’t make any economic sense and also because it can cause dressing room unrest. Other players that are earning lower and giving more to the team will start demanding for improved deals, which can lead to a crisis if not carefully managed.
The situation with Aaron Ramsey has shown this, as Arsenal are reluctant to match his wage demands, given that he has not been a key member of the first team this term.
Arsenal fans were over the moon when Ozil joined them in 2013 from Real Madrid. They finally had a superstar comparable with any on the planet. Five and a half years on, there have been trophies, brilliant goals, assists and joyous moments, but the time to leave has come. Arsenal should be courageous.
Previous articleReliable source makes surprise Newcastle United transfer rumour
Next articleSeagulls aiming higher