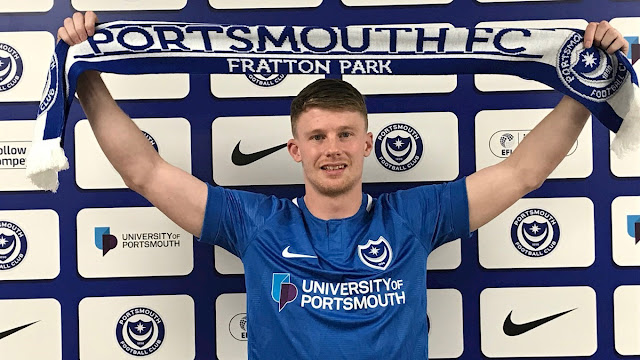 League One leaders Portsmouth have completed the signing of Andy Cannon from Rochdale on a two-and-a-half year deal with the option to extend by a further year.
The 22-year-old will have to wait till January 12 when Pompey take on Blackpool to make his debut. As he is Cup tied, he cannot take part in the club’s upcoming FA Cup and Checkatrade Trophy games.
Cannon has so far played 12 games in League One this season and has failed to register a goal. However, he has shown glimpses of potential and will continue to get better with time as he is still a young player.
The Ashton-under-Lyne born Cannon was signed for a fee of just £150 000. Though add-on fees are likely to be included, he looks like a player that could reach Championship level quality with the right guidance. Therefore, this could prove to be well spent money in the long-run.
Cannon is unlikely to break into Pompey’s starting XI straight away but he could serve as a valuable squad rotation player.
Pompey are well on course to win promotion to the Championship next season. They are currently on top of the third-tier standings with 57 points from 26 games and are five points ahead of second placed Luton Town.
While speaking to Portsmouth’s official website, boss Kenny Jackett highlighted what he wants to see Cannon bring to the team and said:
“I see Andy as an attacking midfielder and feel he will be a good addition to our squad. I’m looking forward to working with him.”
Previous articleDoncaster Rovers boss Grant McCann speaks on Leeds youngster Mallik Wilks
Next articleDean Ashton makes statement which will not leave Aston Villa fans happy

League One race for promotion: Do Sunderland have what it takes?

League One has been attracting a lot of attention in recent weeks, with 12 teams all involved in relegation survival. With the international break upon...
Read more