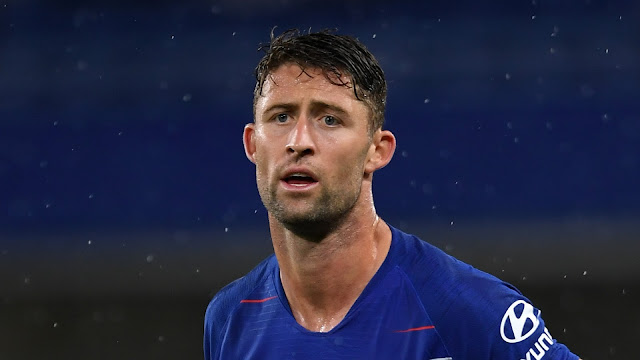 Fulham are reportedly close to securing the signature of Gary Cahill from Chelsea as they seek to replace Timothy Fosu-Mensah in their ranks. Mensah has failed to secure a regular role since his temporary move from Manchester United during the summer and it appears that the Cottagers have decided to terminate his loan deal to pursue a probable replacement.
According to LoveSportRadio, the west London side are prepared to send Fosu-Mensah to the Old Trafford club in the near future and they would thereafter shift their attention towards signing Cahill from Chelsea. The former England international has been a key contributor for the Blues over the past eight seasons but he has not been able to cement a regular spot this term with manager Maurizio Sarri preferring Antonio Rudiger and David Luiz in the central defence with Andreas Christensen generally acting as the option from the bench.
As such, the veteran has been restricted to less than 30 minutes of league action through the campaign and he appears set to part ways with the Blues during the ongoing transfer window. Meanwhile, LoveSportRadio claims that the Cottagers are only aiming to pursue the centre-back on a short-term loan for the season and it will be interesting to see whether the veteran fancies the move across London, given Claudio Ranieri’s side have been largely vulnerable at the back.
Cahill has shown signs of regression over the past year where his performances have been questioned. However, he would still provide vast league experience and expertise which has genuinely been lacking within the Cottagers backline despite their spending spree during the summer. Fulham are currently four points behind safety after 21 games into the season. They are scheduled to entertain Oldham Athletic in the FA Cup third round in the next encounter.
Previous articleSeagulls aiming higher
Next articleTottenham Hotspur manager drops fresh update on January transfer plans

Raheem Sterling has signed a five-year contract with Chelsea after leaving Manchester City. The England international has been a significant contributor for Manchester City over...
Read more
Arsenal

Arsenal keeper Emiliano Martinez hasn’t been included in the squad ahead of their opening league match at Fulham, with Brighton and Aston Villa keen...
Read more
Chelsea

Chelsea have turned down Inter Milan’s bid for N’Golo Kante that involved Marcelo Brozovic as a makeweight, according to 90MIN. The 29-year-old suffered an injury...
Read more