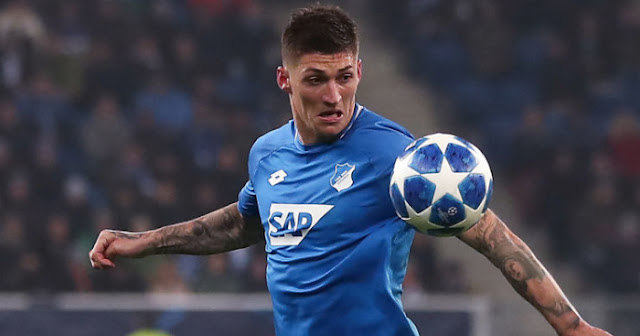 A report published by German source Bild has claimed that Championship leaders Leeds United are interested in luring Hoffenheim ace Steven Zuber.
Many will remember Zuber from the 2018 World Cup as he went on to equalize for Switzerland during their 1-1 Group stage draw against Brazil.
The Whites have a good chance to gain promotion to the Premier League for the first time since 2004 this season. Adding a few quality players to the roster this month will only increase the club’s chances of finally making a return to the top-flight.
The 27-year-old Zuber has struggled for regular game time at Hoffenheim this season as he has so far made just nine appearances in the Bundesliga.  With 18-months left on his current contract, it is likely that Hoffenheim will consider selling if they receive a decent offer.
Leeds are now just two points ahead of Norwich City on the Championship standings following 4-2 defeat against Nottingham Forest on New Year’s Day. Zuber will add squad depth to Marcelo Biesla’s side. The Swiss international is versatile, being able to play as a winger on either side and also as an attacking midfielder.
Zuber is now at the peak of his career and in addition to this, he is able to surge forward, creating goal-scoring opportunities and also assist with defence.
Leeds have a good chance of winning promotion to the English top-flight next season and this is something which could motivate Zuber into joining the Yorkshire giants.