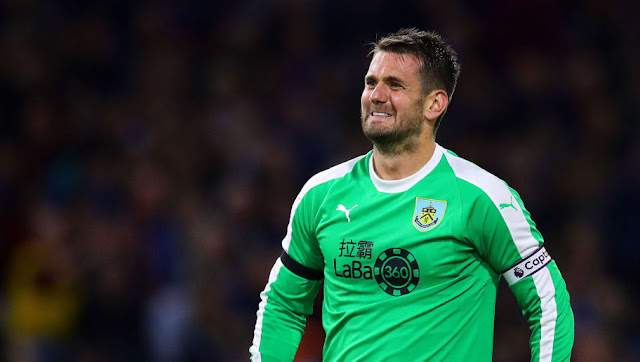 Noel Whelan has suggested that Burnley goalkeeper Tom Heaton would be a good signing for Championship side Leeds United.
The Whites do not have experienced cover for current first choice shot-stopper Bailey Peacock-Farrell.  The 22-year-old Peacock-Farell also did not have a good game during Leeds FA Cup defeat against QPR last weekend.
It would not be a bad idea for the Whites to bring in a keeper with Premier League experience as they look to secure their place in the top-flight next season. Heaton was regarded as one of the best English goalkeepers until last season. He was even at one point in contention to serve as  England’s first-choice keeper during the 2018 World Cup.
An injury to Heaton at the beginning of last season meant that Burnley had to field Nick Pope in goal. Pope made the most of his opportunity and simply became too good to drop. The 26-year-old Pope was so impressive that Gareth Southgate included him as the third-choice goalkeeper during England’s 2018 World Cup campaign.
Both Pope and Heaton were injured at the start of this season. This meant that Cherries manager Sean Dyche had to bring in former Manchester City keeper Joe Hart. Hart has since kept the number one jersey. This has consigned both Heaton and Pope to the bench.
Heaton is a keeper who can clearly start for most team’s in the top-flight. He should leave Burnley and join a new club.
Whelan said on BBC Radio Leeds:  “Yes, we do need another goalkeeper. I completely agree. I think we do.
:If you can get a Heaton, or someone like that from the Premier League who has got that quality, ready now, I would put him in, I would.”