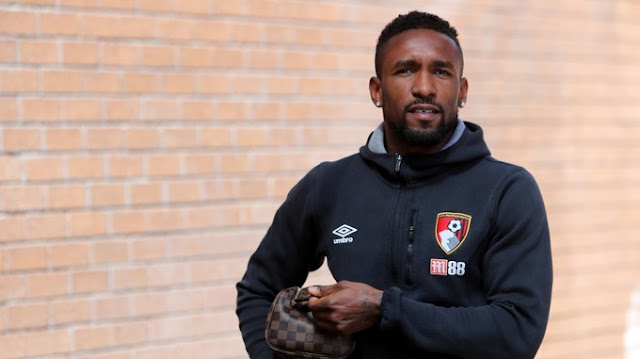 Rangers have reportedly secured the services of Bournemouth striker Jermain Defoe on an 18-month loan deal, according to a report published by Sky Sports.
The loan deal comes as no surprise. Defoe is now at the end of his career and is not the striker that he was during his heyday with Tottenham Hotspur. The veteran has played just four times in the top-flight for the Cherries this season, failing to find the back of the net.
The 57-times capped England international Defoe will now be playing under the management of his former international team-mate Steven Gerrard. Despite the fact he is past his prime, the Scottish Premiership is less physically demanding than the English League.
Defoe could therefore be a good player for Gerrard’s side who are looking to win the Scottish top-flight this season and end the domination of Celtic.
The loan deal will include two recall options- one during the summer of 2019 and another in January 2020.
As quoted by Sky Sports, Gerrard said:
“I’m delighted to be able to welcome Jermain to Rangers. He is an exceptionally talented striker and vastly experienced footballer who has scored goals at every club he has played for.
“He will be a great addition to our dressing room and we look forward to integrating him into the squad whilst we work in Tenerife over the next week.”
Previous articleDean Smith provides update on the future of key Aston Villa player
Next articleSouness changes his stance on Tottenham’s title chances this season

Former England player Ray Parlour has told Jack Wilshere to join the Championship side Bournemouth following reports linking him with a move away from...
Read more
AFC Bournemouth

Manchester United manager Ole Gunnar Solskjaer is keen to sign Bournemouth forward Josh King, but the club haven’t made a decision about that yet,...
Read more