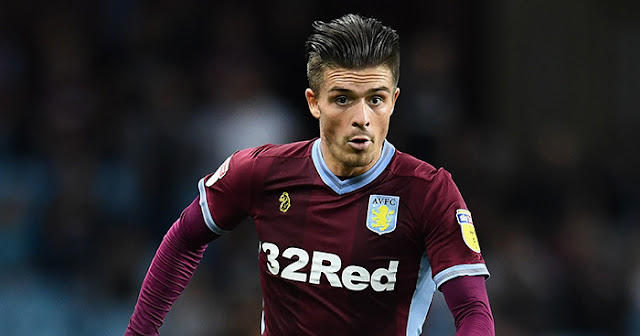 Football.London’s Tottenham Journalist Alisdair Gold has claimed that Tottenham could try to sign Aston Villa star Jack Grealish next summer.
The Lilywhites attempted to and ultimately failed in trying to sign the highly-rated Grealish last summer. Grealish is one of the best players in the Championship and has been a stand-out performer for the Villains over the past few seasons.
Grealish is clearly a player who is Premier League quality and unless Villa manage to win promotion, it would be hard to see the 23-year-old remaining content at Villa Park beyond next summer.
So far this season, Grealish has made 21 Championship appearances for Dean Smith’s side, scoring two goals as well as providing four assists.
He still does have a few flaws in his game and will probably not be integrated into the Spurs starting xi on a regular basis if he were to move to Mauricio Pochettino’s side. However, he is a player who could develop into a Premier League star in the future.
Spurs would also be the perfect environment for him to hone his game as their manager Pochettino has a very good reputation in terms of how he works with up and coming talent.
In a Q&A for Football.London, Gold said: “It doesn’t say too much about Grealish if he were to leave just five months after signing a new deal at Aston Villa. He doesn’t seem that kind of lad, being a Villa boy through and through.
“He did think he was leaving in the summer when the club was struggling financially, but to put pen to paper on a new deal changes things.
“He will reassess his future next summer and Spurs will look again at his situation. I’d be shocked if any January move happened.”