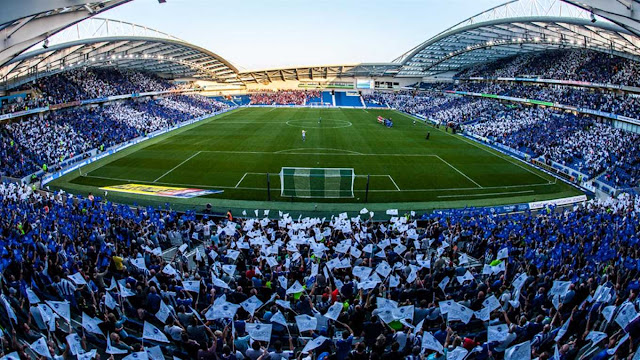 The magical 40-point mark for some is becoming ever closer in the Premier League. For Brighton & Hove Albion, it would represent a third successive season at football’s top table. Not blessed with the oil money of Manchester City nor the rich bestowed on Chelsea, the Seagulls know reaching that magic mark is success in itself.
Having survived what is known as ‘second season syndrome’, the struggle against relegation after the initial season of promotion, the Seagulls are now around 5 wins away from knowing they can dine with the big boys again next season.
For a club that has been at the very bottom end of the Football League and very, very close to ending up in non-league football to ground-hopping around the South after the ill-fated sale of the Goldstone Ground, Brighton fans have certainly been through the mill in the last 20 odd years although they certainly enjoyed far more success since the turn of the century.
Investment has also been made in a new stadium which was a long time coming and more recently in a training ground complex to allow the club to begin to compete against more established Premier League clubs. One consistent for the Seagulls is manager Chris Hughton, himself a former top-flight player for most of his career and having managed both Newcastle Utd and Norwich City in Premier League campaigns. Under-rated in both these spells, Hughton seems to have found his niche on the South Coast and knowing he doesn’t have the budget of a top six outfit, each signing made is crucial in more ways than one.
There is a huge team effort around the club brought about by the manager and he is well aware of the need to gain as many points against the clubs of similar size to them. Last season they made themselves difficult to beat and upset more than one of the considered elite clubs.
The compact nature of Hughton’s teams make them hard to break down and they rarely concede a huge amount of goals. At the other end of the pitch they do suffer from a lack of goals despite 8 so far this year from Glenn Murray, but goal scorers cost money so the Albion do have to take their chances when they appear.
Home form is also vital when you know you need to collect points against the sides in and around you, but that’s not to say they aren’t capable of upsetting the applecart, holding Arsenal to a draw and beating Manchester Utd so far this season.
There is no reason given where they are now with 17 games to play why Brighton won’t finish in their best ever position for over 30 years and if they manage to keep to a sensible transfer policy and improving year on year, they might even emulate Burnley and find their way to the Europa League, well we can all dream!
Previous article3 Reasons why Arsenal need to let go of Mesut Ozil this January
Next articleFulham close to securing their first winter signing to replace Fosu-Mensah

Dangerous times for Brighton, but can troubles be blamed on one specific thing?

Going into the final months of the season, Brighton & Hove Albion find themselves in a desperate battle to retain their Premier League status....
Read more