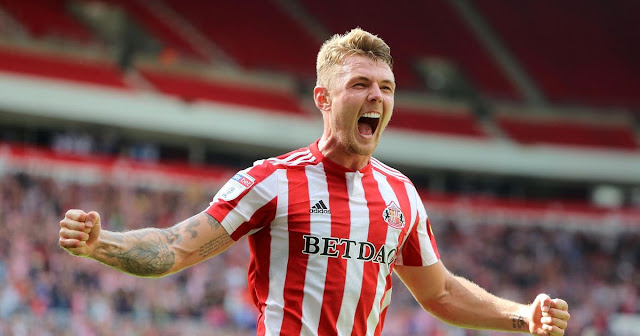 League One side Sunderland have confirmed the signing of midfielder Max Power through their official website.
Power initially joined the Black Cats on loan last summer from Wigan Athletic. He has established himself as a first-team regular, making 17 League One appearances whilst scoring two goals in the process.
The 25-year-old has signed a contract which will see him remain at the Stadium of Light till the summer of 2021.
Power has proven through his performances that he is good enough to play in League One and the club have definitely done the right thing by acquiring his services on a permanent basis as they look to win promotion to the Championship.
Power is definitely a player who is even worthy of playing in the Championship. Sunderland are currently on a major rebuilding phase after having been relegated from the Premier League and Championship in consecutive seasons and Power could have a big role to play as they look to rebuild their lost reputation as a club worthy of playing at the highest level.
Sunderland manager Jack Ross appears to be a fan of Power and when commenting on the player earlier in the season, said as quoted by The Chronicle:
“It reminds you why we were so keen to bring him and those attributes that he’ll bring over the course of a season.
“He’s desperate to do well, that’s why he’s ended up frustrated [when not in the starting XI] at times.”