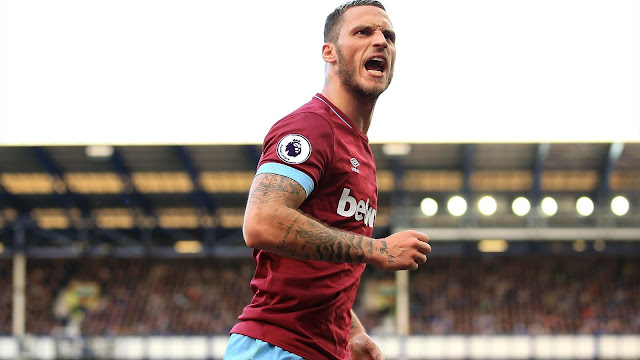 West Ham United forward Marko Arnautovic has been earmarked as a probable option to bolster the Chelsea frontline during the ongoing transfer window. The Austria international has taken his game to the next level during his time with the east London club and he has already netted seven times in the Premier League this season including a brace in the recent 2-2 draw against Brighton & Hove Albion.
According to Bleacher Report, the former Stoke City man has been identified as a probable option to strengthen the Blues’ frontline, should the club fail to acquire the signature of Gonzalo Higuain from AC Milan. The Blues’ strikeforce has genuinely struggled this term with Alvaro Morata and Olivier Giroud netting a combined six league goals and this has generally put the burden on Eden Hazard to make the difference.
Owing to this, the west London side appear keen on recruiting another marksman during the winter period, although any deal for Arnautovic would come as a surprise, given the Austrian’s importance at the London stadium.
The Austrian alongside Felipe Anderson have been among the standout performers for the Hammers in the attack front this term and sanctioning his sale does not seem on the club’s priority, though things could change by the end of the campaign.
Arnautovic’s brother and agent has previously indicated that the marksman still savours the ambition of playing Champions League football again and this could potentially be the reason behind the Austrian pursuing a fresh challenge in the future.
Meanwhile, West Ham jumped back to the top half of the Premier League table on Wednesday night after they secured a 2-2 draw against Brighton after being 2-0 down at one stage. Arnautovic saved the Hammers’ blushes with both goals while ending the club’s three-match winless run against Chris Hughton’s men.
Previous articleDean Ashton makes statement which will not leave Aston Villa fans happy
Next articleSunderland confirm permanent signing of highly-rated midfielder

Raheem Sterling has signed a five-year contract with Chelsea after leaving Manchester City. The England international has been a significant contributor for Manchester City over...
Read more
AS Monaco

West Ham are reportedly leading the transfer race to sign AS Monaco player Djibril Sidibe. According to a 90MIN report, the Hammers are currently in...
Read more
Chelsea

Chelsea have turned down Inter Milan’s bid for N’Golo Kante that involved Marcelo Brozovic as a makeweight, according to 90MIN. The 29-year-old suffered an injury...
Read more