Patryk Klimala has welcome the challenge of proving himself at “a huge club in Europe” after signing for Scottish reigning champions Celtic F.C on a four-and-a-half year deal.

The Poland under-21 international joins for the club in a reported £3.5m fee after seven goals in 18 appearances to his name this season for Ekstraklasa side Jagiellonia Bialystok.

Klimala, being Celtic’s first signing of the January window and a striker, eases the burden on the club’s main striker Odsonne Edouard in attack.

Completing his transfer to Celtic, the 21-year-old said:

“It’s a big moment for me and I’m very excited.

“The last 24 hours were intense. I was waiting for the decision to be finalised so I could finally come here and meet everyone.

“I had the chance to see the stadium and I felt the atmosphere. It was amazing. I understand how massive a club Celtic is, but I feel I’m ready for this now.

“I’m looking forward to playing for a club with such a big history and I know Celtic are a huge club in Europe. I want to give fans a lot of happiness and hopefully score a lot of goals for Celtic.”

The signing of Klimala – who has five appearances at u21 level for Poland with two goals to his name, was announced as Celtic’s first post on their new TikTok social media channel. 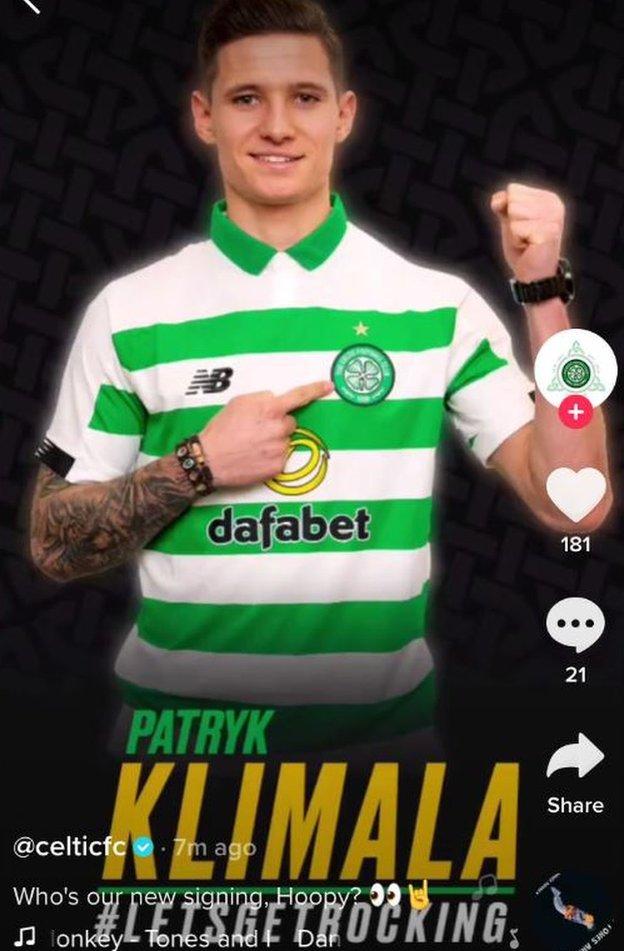 Klimala has netted scored 11 goals in 48 appearances in total for Jagiellonia, having made his debut in July 2018.

He spent a season on loan at Wigry Suwalki in the 2017-18 season, scoring 13 times in 28 games, and was previously part of Legia Warsaw’s academy.