Throwback 2011: Blue-per is the Colour – Will Torres Bounceback from Howler? 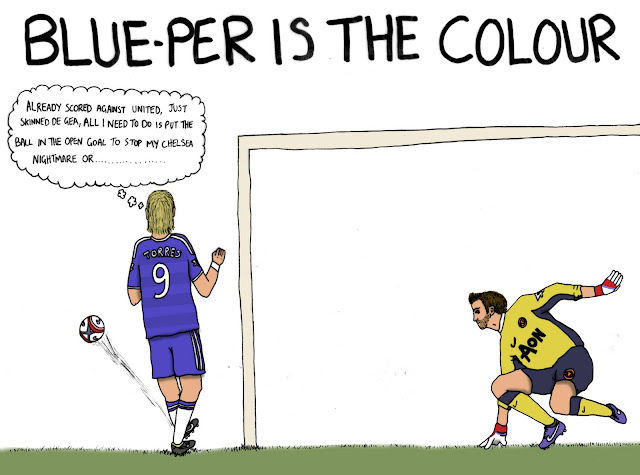 Struggling Chelsea star Fernando Torres managed to overshadow scoring his second goal for the Blues yesterday with a horrific open goal howler seven minutes from the end of the game.

Glimpses of his former self were evident throughout the match, but his jaw-dropping miss stole the headlines and is certain to feature in football blooper DVDs for years to come.

Torres looked distraught as he trudged off the pitch after the final whistle with the jeers of United fans ringing in his ears, but Chelsea keeper Petr Cech has insisted the striker will continue to improve despite his latest setback.

Speaking after the game Cech said: ‘This is one thing in football that happens and what he can remember is he played really well and scored a great goal. I can see every time the guy is improving.’

‘At Stoke, he had a brilliant match and was unlucky not to score.’

‘The last match, he created both goals against Bayer Leverkusen and against United he created a huge chance for Ramires in the first half, which if he’d left for Daniel Sturridge, it would have been a simple tap-in.’

‘He also scored a great goal and then got himself another opportunity and, unfortunately, I don’t know what happened. But I am not worried about it, he will score goals.’

‘Everybody is counting goals with strikers and it is always like that.’

‘But if you see Dimitar Berbatov, for example, he got into United not only because he can score goals but because he also created 30 for Tottenham every season.’

‘That’s why they brought him to United and Torres is doing the same. He scores goals and can create them.’

‘Ideally, you want your striker to score but if Torres creates two goals every game then who cares?’